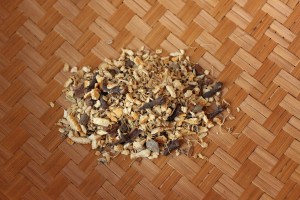 (This recipe makes about 3, 8 ounce cups – cut recipe in half for one large mug)

Note: If you make chaga chai (as a substitute for Assam CTC, Rooibos, or Tulsi), you should boil the chaga for 20-30 minutes. In this case, combine the chaga along with the masala spices at a medium simmer for 30 minutes. And since chaga is so strong, use 3 teaspoons with 3 cups of water instead of 4 teaspoons. You might also need to add a bit more water at the end of the 30 minutes as some of the water will have evaporated during the extended simmering time.

“This is the perfect place to go if you have an extra hour, the atmosphere is warm and unique and the staff is very knowledgeable. The tea was delicious.” All Events in Detail | Calendar